Get Real: “Straightening the Direction” 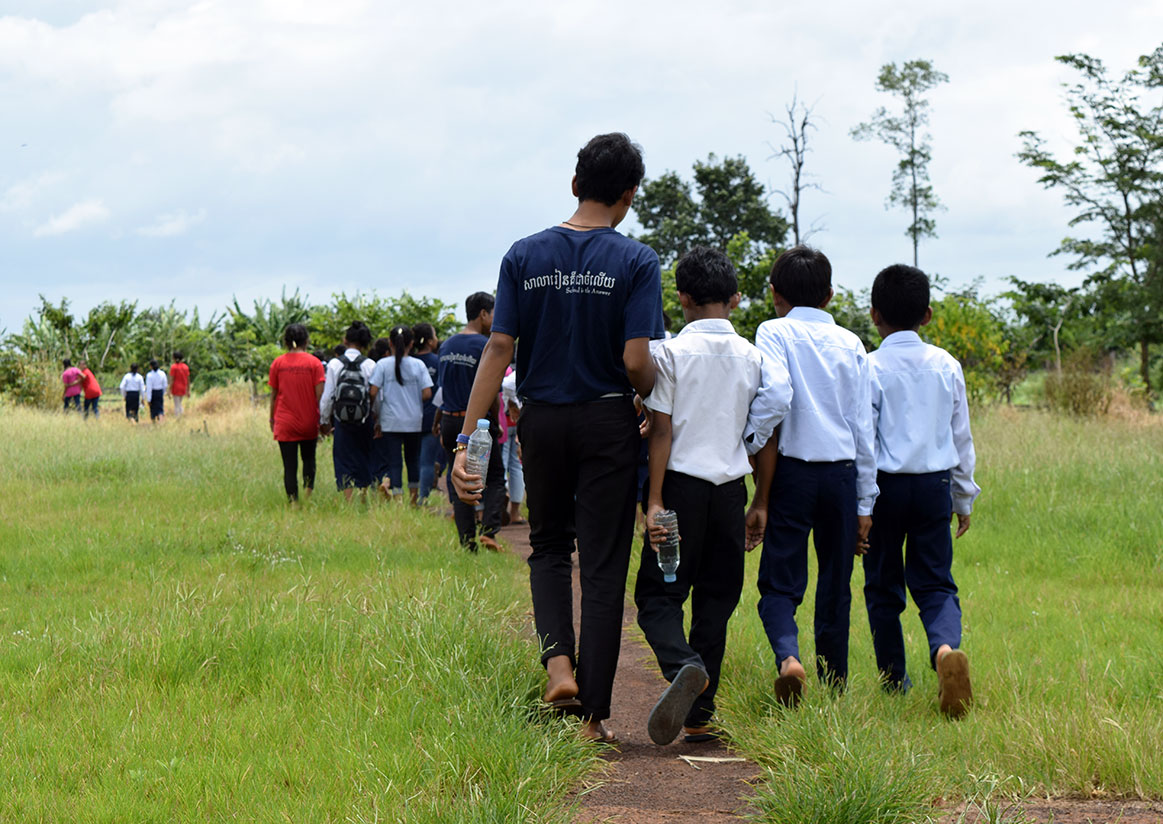 The 2017-2018 school year has finally come to a close, and with it we’d like to share with you how the pilot year of our Mentorship Program has changed the path forward so far!

Last fall we told you three stories. We told you the story of Chamnan, who had all of the tools she needed to step forward but wasn’t sure what the path looked like. The story of Channy, who led the way but had no one to guide her. And of Sokha, who could see only the people she did not want to become but not the one she wanted to be. As our university and tertiary education program continues to expand, we’ve become more closely acquainted with what the path looks like on the way to where our students are heading. Quite frankly it is poorly lit, rarely trodden, and so often without clear direction.

On a broad scale the students who are making it to the end of the road are the exception among their peers, somehow having found the gumption to move forward but with few to guide them. You’ve heard about university, you’ve heard about the possibilities that education can bring, maybe you’ve met someone who studied in University before.  But it is your daily surroundings, the community you grow up in, the majority, that will always speak louder than the exception.

Together with your support, last December we set out to change that narrative. We sought to shine a light on the path forward, to foster a culture of leadership and inclusion, to build a community of positive role models, and to open eyes to just how many paths there are to choose from. Our first step forward was to begin a Sunday guest speaker series for our urban High School students. We spread our branches out in the Siem Reap community to connect with local leaders and change-makers and hosted twenty-four Cambodians to come and share their story.  They spoke about their careers, how to be successful in their field, and in some cases they began at the beginning, explaining in detail what a career in a field our students have never heard of actually looks like. After all, how many times have you heard from the CEO of a social enterprise circus?

More importantly, many of these speakers shared stories of their childhood. An IT engineer and co-owner of one of the most successful technology sales and service shops in town told us about his first job washing dishes. How he grew up the son of a fisherman, taking the cows out to the field every day after he finished school. The author of a best-selling novel about young women in Cambodia shared stories of selling herbs she had collected in the forest in order to buy her books for primary school. She spoke of the first time she flew on an airplane, despite the fact that no one in her village believed that women are capable of traveling far away on their own.

All told, our urban High School students heard from Cambodian artists, authors, fashion designers, chefs, IT/software engineers, development specialists, social workers, business owners, ornithologists, dentists, and pharmacists, many of whom started out in a very similar place. The benefits were two-fold: our students opened their eyes to paths they had never seen before, and they saw someone who looked just like them standing at the end of the road. For our second step forward we drew from within our own circle: our PLF University Scholars. Over the course of the school year, thirty-one of our own University scholarship students came back to speak to our students studying in Primary through High School, as well as their parents. The majority even spoke at more than one PLF-supported program, sharing their successes and challenges on the way to University, what they wish they had done differently, and what they learned along the way.

What stood out about these speeches is the relevance: these were fellow PLF students, often from the same village as those they were speaking to. When Vannak told her story to the students at Chey Primary school, she spoke of dropping out of school after Grade 7. At the time her father had told her, “I know that you really wanted to go back to school, but we are far, so we can not. Maybe in the next life you will be born in the town so it’s easy for you to attend in school.” Every single student in the room nodded upon hearing this. They have all heard these words before.

Vannak is now in her third year of University studying towards a degree in English Literature, and she too comes from Pouk District. This matters. A university student from your hometown speaking to you and your peers is literal proof that you can study in University too. If someone who was told “maybe in the next life” they could meet their goals can fight through and meet their goals anyway, so can you. (Read more about Vannak’s mentorship story, here.) Our third step forward this year was two mentorship field trips: a trip for our Primary School graduates in Romchek and Koh Ker villages to see the Secondary School and dormitory in Srayang, and a trip for the Srayang Dormitory students to see the High School and dormitories in Siem Reap. Students (and their parents, in the case of the Primary School graduates) toured their future classrooms, listened to the stories and words of advice from the students they will live with, and shared a meal all together. Both trips were a monumental “first”, for us and for our students.

The chance to see with your own eyes, to touch, to be in that space, is an opportunity without substitute. It is one thousand times more powerful than the words that any one of us could use, standing in front of a room of young students from the remote countryside, to put a clear picture in their head. If you know exactly what you want out of your future and can envision yourself there, you will always be one thousand times more equipped to go out and get it.

In a way we hadn’t previously understood the importance of, these field trips also brought everyone together in a common space into which they belonged. Believing that you can graduate from University is important, but so too is the belief that you belong there in the first place. The belief that you, a student from the remote countryside, belong at the table where the future of the country is decided. (Read more about why this sense of belonging matters, here.) A student from Romchek Primary School pictures her own future as she listens to Reasey, a University scholar, share her story.

Over the course of this pilot year we also encountered a notable challenge; one that revealed itself in a few different ways. While our team had a clear idea of what mentorship meant, we learned that the majority of the community we are engaging with has never even heard of this term, mentorship.

To begin with, there is no exact Khmer translation for the word mentorship. Our Student Counselor, Sokha, often spoke of “bringing our students out of the shadow” or “being like the camera and adjusting the lens”, but the closest version we could come up with is តម្រង់ទិស  (“dtamrong tes”). This literally translates into “straightening the direction”.  Launching our mentorship program required a great deal of nuance, and each time we asked a student or a member of the community to share their story we had to begin by explaining the premise of the program, the value of relatable role models and mentors, and the importance of sharing these stories, of extending a hand to those below you. The majority of those we asked to speak had either never done so before or were surprised to hear that their story was worth sharing.

Make no mistake, Cambodians understand and appreciate these values. The difference is that the nearly complete loss of an educated adult population affects society in a host of ways, many of which are less conspicuous. This is one of them. By far and large, any Cambodian who was born following the thirty years of civil war and genocide grew up surrounded by those who were denied the opportunity to receive an education, and this includes the people who raised them.

The generation of Cambodians who grew up to be successful in this day and age did so without mentors or role models readily available to them, and indeed many of them received such guidance from abroad. The new generation of youth in Cambodia, the students we are working with, is the first in this century to finally have a host of fellow Cambodians standing above them. The challenge isn’t about a lack of successful Cambodians, it’s about shining a light on these achievements and building a ladder to get there.

You can imagine our surprise when the IT engineer who grew up tending to his family’s cows told us he wasn’t sure anyone would be interested to hear his story. Now imagine how our students felt when they stood in front of their entire village to share their story and everyone listened.

It is with great pride that we report this pilot year of the mentorship program a success, in large part due to those of you who remember the role models and mentors that held a hand out to you. You came together with us to shine a light on the path forward, to reach out your own hand out to the person on the rung below you, and in so doing you encourage others to do the same. “Now I know clear.” one of our high school students wrote to us, “If they can do it, so can I.” Join with us in supporting the next year of mentorship by donating here!